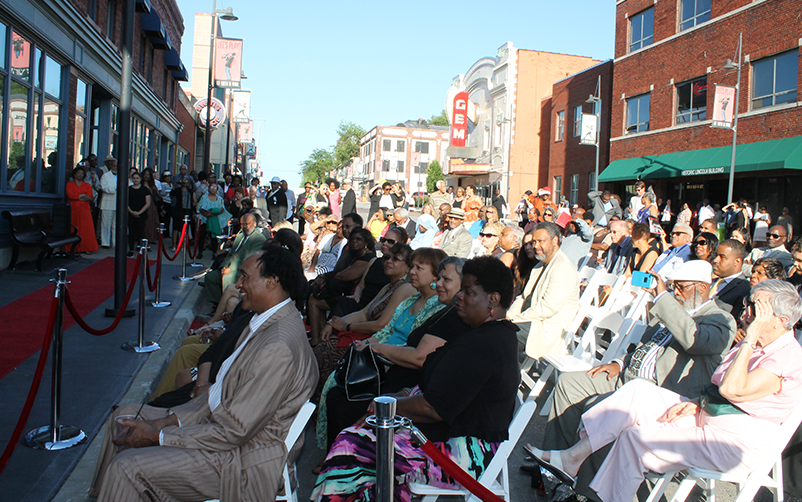 The annual event includes a reception for sponsors followed by the induction ceremony which is free and open to the public. The Induction Ceremony takes place outside in front of the medallion installation location. John Bluford, retired CEO of Truman Medical Center, chaired the 2014 & 2015 Walk of Fame Selection committee and Darwin Curls, chaired the 2016, 2017, 2018 and 2019 Walk of Fame Selection committee. The names of the inductees are unveiled on bronze medallions before a large audience including representatives of the honorees who are presented replicas of the medallions. For the past six years and for the next year, the induction activities will take place on 18th street between Paseo and Woodland in Kansas City, Missouri. The bronze medallions are a permanent feature that is not tied to the annual event date. Visitors have the benefit of enjoying this history and culture for many years.

During the concert, a video, acknowledging the role Kansas City and specifically 18th& Vine played in the evolution of jazz and the development of jazz artists in history, is presented to an audience of 500 in the Gem Theater. Portions of this video were provided courtesy of the Thelonious Monk Institute of Jazz.

An added feature of the 2015 American Jazz Walk of Fame was a free summer concert series held every Sunday evening from July 4 through August 30, 2015. The free concerts, occurring on the North side of the Museums on 18th &Vine, welcomed hundreds who brought lawn chairs and blankets to enjoy a variety of musical entertainment during hot summer nights in the Jay McShann Pavilion. Since then, we have hosted free fireworks celebration on July 3, celebrating Independence Day in the Jazz District.

Our marketing campaigns have included mounting billboards strategically placed to be viewed by the widest cross section of highway travelers. Building upon our internet and social media experience last year, we sent email blasts and Facebook posts to a growing audience. Print ads have been placed in the Kansas City Call, Globe and JAM Magazine. Radio ads were placed on Carter Broadcasting (KPRS) 103.3. KPRS was also on-site broadcasting live from the VIP reception. We received public service announcements on radio station KKFI and cable television station 2 – the City of Kansas City, Missouri public access station.

VisitKC’s (Convention & Visitors Bureau) partnership expanded our reach to include their members and partners in the region. A blogger in Omaha shared their American Jazz Walk of Fame weekend and reported a thoroughly wonderful cultural and entertaining experience. Our banner ads and their “Weekender” on-line newsletter gave us exposure to their database of 50,000+ travelers interested in visiting Kansas City.

The American Jazz Walk of Fame is included in the VisitKC collateral material which is viewed by nearly 300,000 people. We were recognized by AAA Midwest Traveler as a Midwest Travel Treasure whose publication is read by more than 840,000 frequent travelers. Bloggers have written about the event for the past two years.

We have leveraged these connections and expanded our efforts into the national and international markets this year. Jazz is loved, studied, played, practiced and honored all over the world. Our vision is Kansas City and The American Jazz Walk of Fame on that stage and included in future travel itineraries.

We have been featured on the NBC TV station, KSHB, in a segment that highlighted the American Jazz Walk of Fame. Paula Saunders, one of the featured concert artists, was interviewed and performed on the NBC morning show. Both of those interviews were repeated the week of the American Jazz Walk of Fame event. Congressman Cleaver, JDRC Board Member and John Bluford, Retired CEO, Truman Medical Center and former Selection Committee Chair were interviewed on a 10-minute segment on NBC.

For the past five years, we’ve secured a special magazine style section of the Kansas City Call that is exclusively devoted to the honored inductees, the concert artists, and a comprehensive review of the amenities found in the 18th & Vine District.

The American Jazz Walk of Fame has attracted a diverse audience, both geographically and ethnically, for the past six years. Our guests have traveled to the Jazz District from areas outside of the greater Kansas City boundaries. Many had never visited the area before. Since 2016, we had several guests from the Washington, DC area. These guests represented communities from around the country who had never visited Kansas City before. Marketing efforts will bring attention to the surrounding neighborhoods and encourage visitation. Often, perceptions of different communities are formed without personal experience. The American Jazz Walk of Fame provides an additional reason to venture into new areas of the city or to revisit familiar areas creating another benefit to the community.

Often, those who live in the city overlook new features and attractions in the city because they have “been there, done that”. The American Jazz Walk of Fame honors artists from the past who may not have received any recognition before. Lifelong Kansas City residents now have something new to consider in a familiar area of their city. The American Jazz Walk of Fame also recognizes contemporary artists, giving newer and perhaps younger residents another reason to visit the district. Musicians are inspired to develop their craft and continue the growth of the jazz genre knowing their efforts could be recognized in the same way.

“The greatest jazz musicians have come from Kansas City, have played in Kansas City, or have been inspired by musicians with Kansas City roots. The American Jazz Walk of Fame honors those talented musicians and celebrates this great Kansas City tradition. We invite you to participate in honoring this tradition in the historic 18th & Vine entertainment district where it all began”, quoted Don Hall, Jr., 2015 event co-chair.

Congressman Emanuel Cleaver, II, member of the United States House of Representatives, representing Missouri’s 5th congressional district, said, “The American Jazz Walk of Fame enhances the world class jazz music experience of visitors and Greater Kansas City residents, while honoring the world’s greatest stars of jazz, in the city where this music matured and adds to the tourist attractions of the Historic 18th and Vine Entertainment District, furthering its role as a destination location.”

Follow us on these social networks to get instant updates